The term ‘entia successiva’ means ‘successive entities.’ And, as you may guess, it is a term one might come across in a philosophy class, in particular when discussing metaphysical questions about personhood. For instance, is a person a single thing throughout its entire life or a succession of different things—an ‘ens successivum’? Though there is no right answer to this question, becoming familiar with the latter perspective can, I think, help people to be more skeptical and knowledgeable consumers of education research. 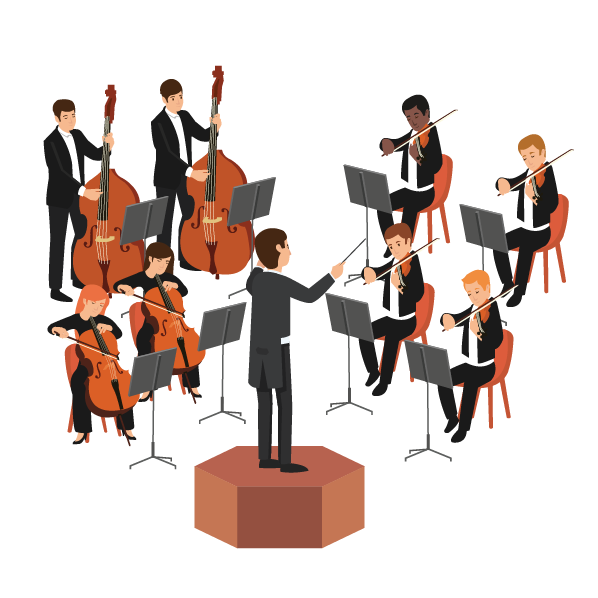 Richard Taylor provides an example of a symphony (in here) that is, depending on your perspective, both a successive and a permanent entity:

Let us imagine [a symphony orchestra] and give it a name—say, the Boston Symphony. One might write a history of this orchestra, beginning with its birth one hundred years ago, chronicling its many tours and triumphs and the fame of some of its musical directors, and so on. But are we talking about one orchestra?

In one sense we are, but in another sense we are not. The orchestra persists through time, is incorporated, receives gifts and funding, holds property, has a bank account, returns always to the same city, and rehearses, year in and year out, in the same hall. Yet its membership constantly changes, so that no member of fifty years ago is still a member today. So in that sense it is an entirely different orchestra. We are in this sense not talking about one orchestra, but many. There is a succession of orchestras going under the same name. Each, in [Roderick] Chisholm’s apt phrase, does duty for what we are calling the Boston Symphony.

The Boston Symphony is thus an ens successivum.

People are entia successiva, too. Or, at least their bodies are. Just about every cell in your body has been replaced from only 10 years ago. So, if you’re a 40-year-old Boston Symphony like me, almost all of your musicians and directors have been swapped out from when you were a 30-year-old symphony. People still call you the Boston Symphony of course (because you still are), but an almost entirely different set of parts is doing duty for “you” under the banner of this name. You are, in a sense, an almost completely different person—one who is, incidentally, made up of at least as many bacterial cells as human ones.

What’s worse (if you think of the above as bad news), the fact of evolution by natural selection tells us that humanity itself is an ens successivum. If you could line up your ancestors—your mother or father, his or her mother or father, and so on—it would be a very short trip down this line before you reached a person with whom you could not communicate at all, save through gestures. Between 30 and 40 people in would be a person who had almost no real knowledge about the physical universe. And there’s a good chance that perhaps the four thousandth person in your row of ancestors would not even be human.

Needless to say, seeing people as entia successiva does not come naturally to anyone. Nor should it, ever. We couldn’t go about out our daily lives seeing things this way. But the general invisibility of this ‘successiveness’ is not due to its only being operational at the very macro or very micro levels. It can be seen at the psychological level too. Trouble is, our brains are so good at constructing singular narratives out of even absolute gibberish, we sometimes have to place people in unnatural or extreme situations to get a good look at how much we can delude ourselves.

An Air Force doctor’s experiences investigating the blackouts of pilots in centrifuge training provides a nice example (from here). It’s definitely worth quoting at length:

Over time, he has found striking similarities to the same sorts of things reported by patients who lost consciousness on operating tables, in car crashes, and after returning from other nonbreathing states. The tunnel, the white light, friends and family coming to greet you, memories zooming around—the pilots experienced all of this. In addition, the centrifuge was pretty good at creating out-of-body experiences. Pilots would float over themselves, or hover nearby, looking on as their heads lurched and waggled about . . . the near-death and out-of-body phenomena are both actually the subjective experience of a brain owner watching as his brain tries desperately to figure out what is happening and to orient itself amid its systems going haywire due to oxygen deprivation. Without the ability to map out its borders, the brain often places consciousness outside the head, in a field, swimming in a lake, fighting a dragon—whatever it can connect together as the walls crumble. What the deoxygenated pilots don’t experience is a smeared mess of random images and thoughts. Even as the brain is dying, it refuses to stop generating a narrative . . . Narrative is so important to survival that it is literally the last thing you give up before becoming a sack of meat.

You’ll note, I hope, that not only does the report above disclose how our very mental lives are entia successiva—thoughts and emotions that arise and pass away—but the report assumes this perspective in its own narrative. That’s because the report is written from a scientific point of view. And from that vantage point, people are assumed (correctly) to have parts that “do duty” for them and may even be at odds with each other, as they were with the pilots (a perception part fighting against a powerful narrative-generating part). The unit of analysis in the report is not an entire pilot, but the various mechanisms of her mind. Allowing for these parts allows for functional explanations like the one we see.

An un-scientific analysis, on the other hand, is entirely possible. But it would stop at the pilot. He or she is, after all, an indivisible, permanent entity. There is nothing else “doing duty” for him, so there are really only two choices: his experience was an illusion or it was real. End of analysis. Interpret it as an illusion and you don’t really have much to say; interpret it as real, and you can make a lot of money.

Good scientific research in education will adopt an entia successiva perspective about the people it studies. This does not guarantee that its conclusions are correct. But it makes it more likely that, over time, it will get to the bottom of things.

This is not to say that an alternative perspective is without scientific merit. If we want to know how to improve the performance of the Boston Symphony, we can make some headway with ‘entia permanentia’—seeing the symphony as a whole stable unit rather than a collection of successive parts. We could increase its funding, perhaps try to make sure “it” is treated as well as other symphonies around the world. We could try to change the music, maybe include some movie scores instead of that stuffy old classical music. That would make it more exciting for audiences (and more inclusive), which is certainly one interpretation of “improvement.” But to whatever extent improvement means improving the functioning of the parts of the symphony—the musicians, the director, etc.—we can do nothing, because with entia permanentia these tiny creatures do not exist. Even raising the question about improving the parts would be beyond the scope of our imagination.

Further, seeing students as entia permanentia rather than entia successiva stops us from being appropriately skeptical about both ‘scientific’ and ‘un-scientific’ ideas. Do students learn best when matched to their learning style? What parts of their neurophysiology and psychology could possibly make something like that true? Why would it have evolved, if it did? In what other aspects of our lives might this present itself? Adopting the entia successiva perspective would have slowed the adoption of this myth (even if were not a myth) to a crawl and would have eventually killed it. Instead, entia permanentia, a person-level analysis, holds sway: students benefit from learning-style matching because we see them respond differently to different representations. End of analysis.

A different but similar perspective on this, from a recurring theme in the book Switch:

Why do “behavioral” goals work when just “goals” don’t? Behavioral goals are, after all, telling you what to do, forcing you to behave in a certain way. Do you like to be told what to do? Probably not.

But the “you” that responds to behavioral goals isn’t the same “you” whose in-the-moment “likes” are important. You are more than just one solid indivisible self. You are many selves, and the self that can start checking stuff off the to-do list is often pulling the other selves behind it. And when it does, you get to think that “you” are determined, “you” take initiative, “you” have willpower. But in truth, your environment—both immediate and distant, both internal and external—has simply made it possible for that determined self to take the lead. Behavioral goals often create this exact environment.