The results reported in this research (below) about the value of provided examples versus generated examples are a bit surprising. To get a sense of why that’s the case, start with this definition of the concept availability heuristic used in the study—a term from the social psychology literature:

Availability heuristic: the tendency to estimate the likelihood that an event will occur by how easily instances of it come to mind.

The researchers—Amanda Zamary and Katharine Rawson at Kent State University in Ohio—made the following predictions, with regard to both student performance and the efficiency of the instructional treatments:

All participants completed the same two self-paced tests two days later. The first assessment, an example classification test, asked subjects to classify each of 100 real-world examples into one of the 10 concept definition categories provided. Sixty of these 100 were new (Novel) to the provided-examples group, 80 of the 100 were new to the combination group, and of course all 100 were likely new to the generated-examples group. The second assessment, a definition-cued recall test, asked participants to type in the definition of each of the 10 concepts, given in random order. (The test order was varied among subjects.) 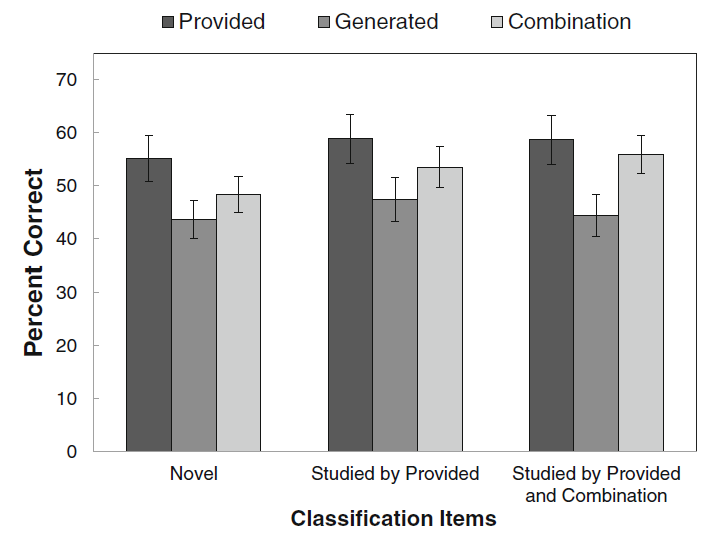 Subjects who were given only textbook-provided examples of the concepts outperformed other subjects on applying these concepts to classifying real-world examples. This difference was significant. No significant differences were found on the cued-recall test between the provided-examples and generated-examples groups.

Another measure of interest to the researchers in this study, as mentioned above, was the time used by the participants to read through or create the examples. What the authors say about efficiency is worth quoting, since it does not often seem to be taken as seriously as measures of raw achievement (emphasis mine):

Howe and Singer (1975) note that in practice, the challenge for educators and researchers is not to identify effective learning techniques when time is unlimited. Rather, the problem arises when trying to identify what is most effective when time is fixed. Indeed, long-term learning could easily be achieved if students had an unlimited amount of time and only a limited amount of information to learn (with the caveat that students spend their time employing useful encoding strategies). However, achieving long-term learning is difficult because students have a lot to learn within a limited amount of time (Rawson and Dunlosky 2011). Thus, long-term learning and efficiency are both important to consider when competitively evaluating the effectiveness of learning techniques. 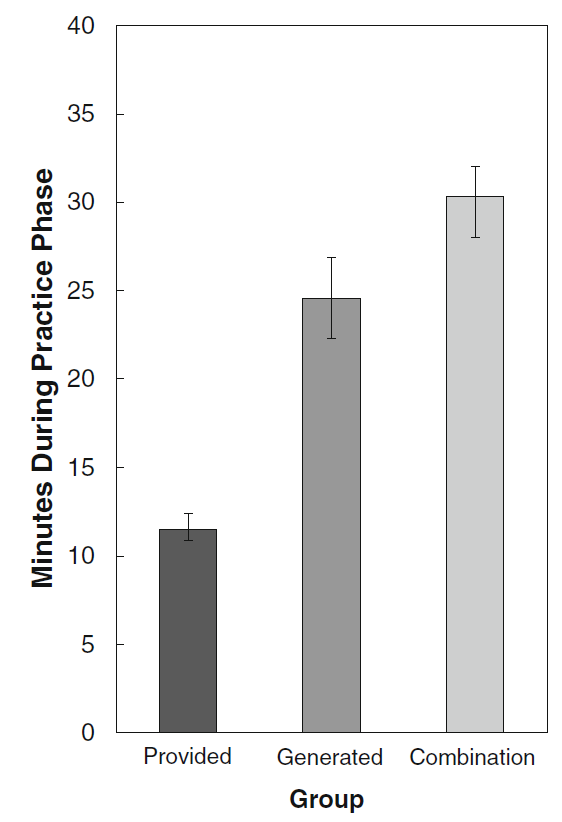 For learning declarative concepts in a domain and then identifying those concepts in novel real-world situations, provided examples proved to be better than student-generated examples for both long-term learning and for instructional efficiency. The second experiment in the study replicated these findings.

First, some familiarity with the research literature makes the above results not so surprising. The provided-examples group likely outperformed the other groups because participants in that group practiced with examples generated by experts. Becoming more expert in a domain does not necessarily involve becoming more isolated from other people and their interests. Such expertise is likely positively correlated with better identifying and collating examples within a domain that are conceptually interesting to students and more widely generalizable. I reported on two studies, for example, which showed that greater expertise was associated with a significantly greater number of conceptual explanations, as opposed to “product oriented” (answer-getting) explanations—and these conceptual explanations resulted in the superior performance of students receiving them.

Second, I am sympathetic to the efficiency argument, as laid out here by the study’s authors—that is, I agree that we should focus in education on “trying to identify what is most effective when time is fixed.” Problematically, however, a wide variety of instructional actions can be informed by decisions about what is and isn’t “fixed.” Time is not the only thing that can be fixed in one’s experience. The intuition that students should “own their own learning,” for example, which undergirds the idea in the first place that students should generate their own examples, may rest on the more fundamental notion that students themselves are “fixed” identities that adults must work around rather than try to alter. This notion is itself circumscribed by the research summarized above. So, it is worth having a conversation about what should and should not be considered “fixed” when it comes to learning.