There are so many connections within and applications of linear algebra—I can only imagine that this will be a series of posts, to the extent that I continue writing about the subject. Here are a few connections that I’ve come across in my reading recently.

For years beyond the first year, all we have to do is raise the matrix to the appropriate power. Since it’s diagonal, squaring it, cubing it, etc., will square, cube, etc., each entry. This computation can be a little more organized—and more straightforward for programming. A matrix has to be square (\(\mathtt{m \times m})\) in order to raise it to a power. Below we calculate the amount in each account after 100 years.

We have seen that the determinant can be thought about as the area of the parallelogram formed by two vectors. We can use this fact to determine the area of a complex shape like the one shown below.

That’s pretty hand-wavy, but it’s something that you can probably figure out with a little experimentation.

Another counterclockwise-moving calculation (though this one can be clockwise without changing the answer) is the calculation of the centroid of a closed shape. All that is required here is to calculate the sum of the position vectors of the vertices of the figure and then divide by the number of vertices.

Here again, it’s just magic, but you can figure it out with a little play. In each case—for both complex areas and centroids—we assign a point to be the origin and go from there. 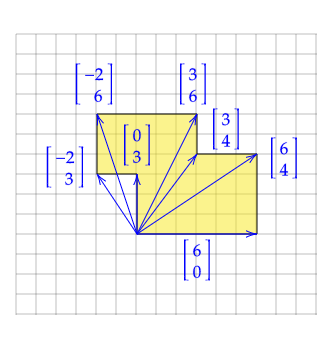