We have talked about the cross product (here and here), so let’s move on to doing something marginally interesting with it: we’ll make a rectangular prism, or the more general parallelepiped. 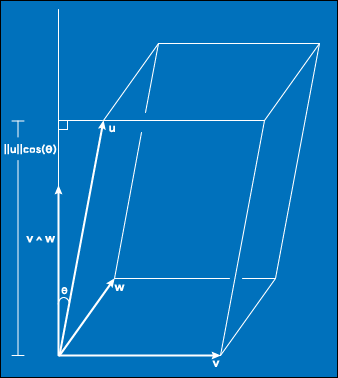 A parallelepiped is shown at the right. It is defined by three vectors: u, v, and w. The cross product vector \(\mathtt{v \wedge w}\) is perpendicular to both v and w, and its magnitude, \(\mathtt{||v \wedge w||}\), is equal to the area of the parallelogram formed by the vectors v and w (something I didn’t mention in the previous two posts).

The perpendicular height of the skewed prism, or parallelepiped, is given by \(\mathtt{||u||cos(θ)}\).

Which means that, after simplifying the volume equation, we’re left with \(\mathtt{V = (v \wedge w) \cdot u}\): so, the dot product of the vector perpendicular to the base and the slant height of the prism. The result is a scalar value, of course, for the volume of the parallelepiped, and, because it is a dot product, it is a signed value. We can get negative volumes, which doesn’t mean the volume is negative but tells us something about the orientation of the parallelepiped.

Creating prisms and skewed prisms can be done in Geogebra 3D, but here I’ll show how to create these figures from scratch using Three.js. Click and drag on the window to rotate the scene below. Right click and drag to pan left, right, up, or down. Scroll to zoom in and out.

Click on the Pencil icon above in the lovely Trinket window and navigate to the parallelepiped.js tab to see the code that makes the cubes. You can see that vectors are used to create the vertices (position vectors, so just points). Each face is composed of 2 triangles: (0, 1, 2) means to create a face from the 0th, 1st, and 2nd vertices from the vertices list. Make some copies of the box in the code and play around!