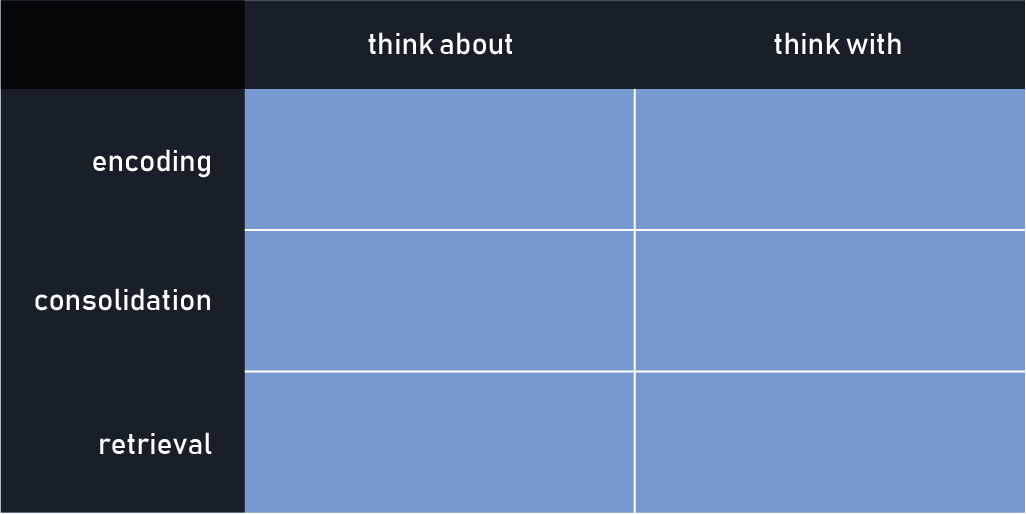 Sometimes kids say “nothing” when their parents ask them what they learned in school today. And, although that response is something we don’t want to hear, it is probably closer to the truth than we want to believe, because, as we all most certainly know, learning doesn’t really happen in a single class period. And, when it does, it’s not learning per se, but encoding, consolidation, or retrieval—or some mixture of the three.

The encoding stage involves introducing you to some knowledge pattern in the natural, social, or academic environment. For example, you may know ratios and rates, how to graph lines on the coordinate plane, and what steepness is, but at some point you are completely new to the concept of slope—which packages those former concepts into a unique bundle—so encoding is what happens when you are first introduced to slope.

There are a few important things to note here. First, slope could have been introduced, or encoded, as an isolated dot. (Well, not exactly. Nothing is ever completely “isolated.” But you get the idea.) Second, regardless whether it is encoded as a standalone concept or as a package of concepts, slope is a new object of knowledge. It is perhaps possible now for the slope blob above to interact or connect with the green blob of content knowledge, whereas none of the individual items can do so. And, third, whatever we mean by slope above, we cannot mean the entire concept of slope (whatever that means anyway).

The new concept of slope on the right is a little too complete to represent encoding, plus any structure created there fades quickly over time like pictures in Back to the Future (forgetting). This is where consolidation comes in. Consolidation solidifies and maintains the arrangements of knowledge components assembled by encoding.

Why should retrieving a concept to answer questions be considered a part of learning that concept? Because, at minimum, retrieving strengthens an encoded concept.