What we focus on at the beginning is how this change affects the graph of the function—and, importantly, how we can consistently describe that change as it applies to any function.

So, for example, the brightest (orange-brown) curve in the image at the right represents \(\mathtt{f(x)=x^2}\), or \(\mathtt{f(x)=1x^2}\). And when we increase the A-value, from 2 to 3, the curve gets narrower. Decreasing the A-value, to \(\mathtt{\frac{1}{2}}\) for example, causes the curve to get wider. The same kind of “squishing” happens with every function type. (Check out this article by Better Explained for a really nice explanation.)

Another idea that becomes clearer when working with non-constant dilations in this way is that zeros start to make a little more sense. 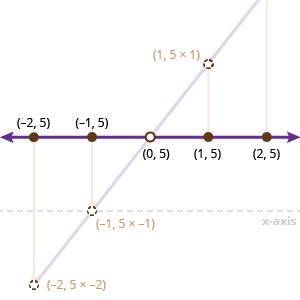